ABOUT ASHLEY ECKSTEIN - Known to Star Wars fans as the voice of Ahsoka Tano on Star Wars: The Clone Wars and Star Wars Rebels, actress and entrepreneur, Ashley Eckstein, founded Her Universe – the groundbreaking fangirl fashion company and lifestyle brand. Ashley has been widely recognized as a business woman and Fangirl trendsetter. She was recently chosen by Good Housekeeping magazine as one of their 25 Awesome Women for 2016. Her Universe is a proud licensee for Disney/Star Wars and Marvel, BBC /Doctor Who, CBS/Star Trek, Studio Ghibli as well as a growing roster of properties.

Ashley is a recognized personality in the “geek world” and an in-demand actress and host starring in several TV specials, live shows, events and videos for Disney, HSN, Comic-Con HQ and more. In addition to Star Wars’ Ahsoka Tano, Eckstein is also the voice of Mia the bluebird on Disney’s Sofia The First, Dagger on Disney XD’s Ultimate Spider-Man and the voice of Cheetah on DC Super Hero Girls. Eckstein was also heard on the big screen in 2016 as the voice of Yaeko in the English adaptation of Studio Ghibli's beloved film Only Yesterday alongside fellow Star Wars actress Daisy Ridley and acclaimed actor Dev Patel. Most recently, she can be seen starring in her own show on Comic-Con HQ, The Her Universe Fashion Show: Fashion Meets Fandom. On October 2016, Her Universe was acquired by Hot Topic, Inc. and joined their stable of brands as a stand-alone subsidiary, e-commerce and wholesale brand. Ashley will continue her role as Founder and GMM of Her Universe and will oversee every aspect of the company.

Her Universe, the groundbreaking fangirl fashion company and lifestyle brand, is the vision of Ashley Eckstein, actress, entrepreneur and voice of Ahsoka Tano in Star Wars: The Clone Wars and Star Wars Rebels. Ashley has been widely recognized as a business woman, Fangirl trendsetter and leading voice for female fandom. Founded in 2010, Ashley launched Her Universe with the mission to create stylish, fashion-forward merchandise for female sci-fi fans. Her Universe is a place for fangirls to step into the spotlight and be heard, recognized and rewarded. Ashley’s goal, from the beginning, was to build the company into a stand-alone entertainment and merchandise brand and, today, Her Universe is leading the way. Hoping to change the perception that science fiction and fantasy is just for boys, Her Universe has joined forces with some of the biggest names in the sci-fi/fantasy world to create fangirl apparel and accessories for such well-known names as Star Wars, Doctor Who, Star Trek and Marvel.

Today, Her Universe, a stand-alone subsidiary of Hot Topic, Inc., has expanded into entertainment and is also known as a lifestyle brand. Her Universe produces a “geek couture” fashion show every year at San Diego Comic-Con called The Her Universe Fashion Show, as well as a docu-series based about the fashion show for Comic-Con HQ.

Not what you were looking for? Go Back. 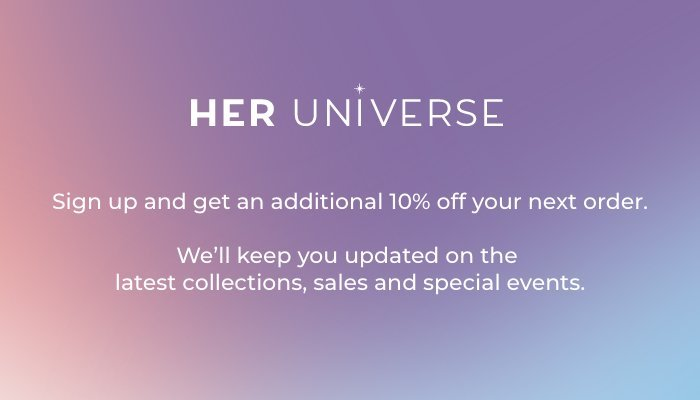